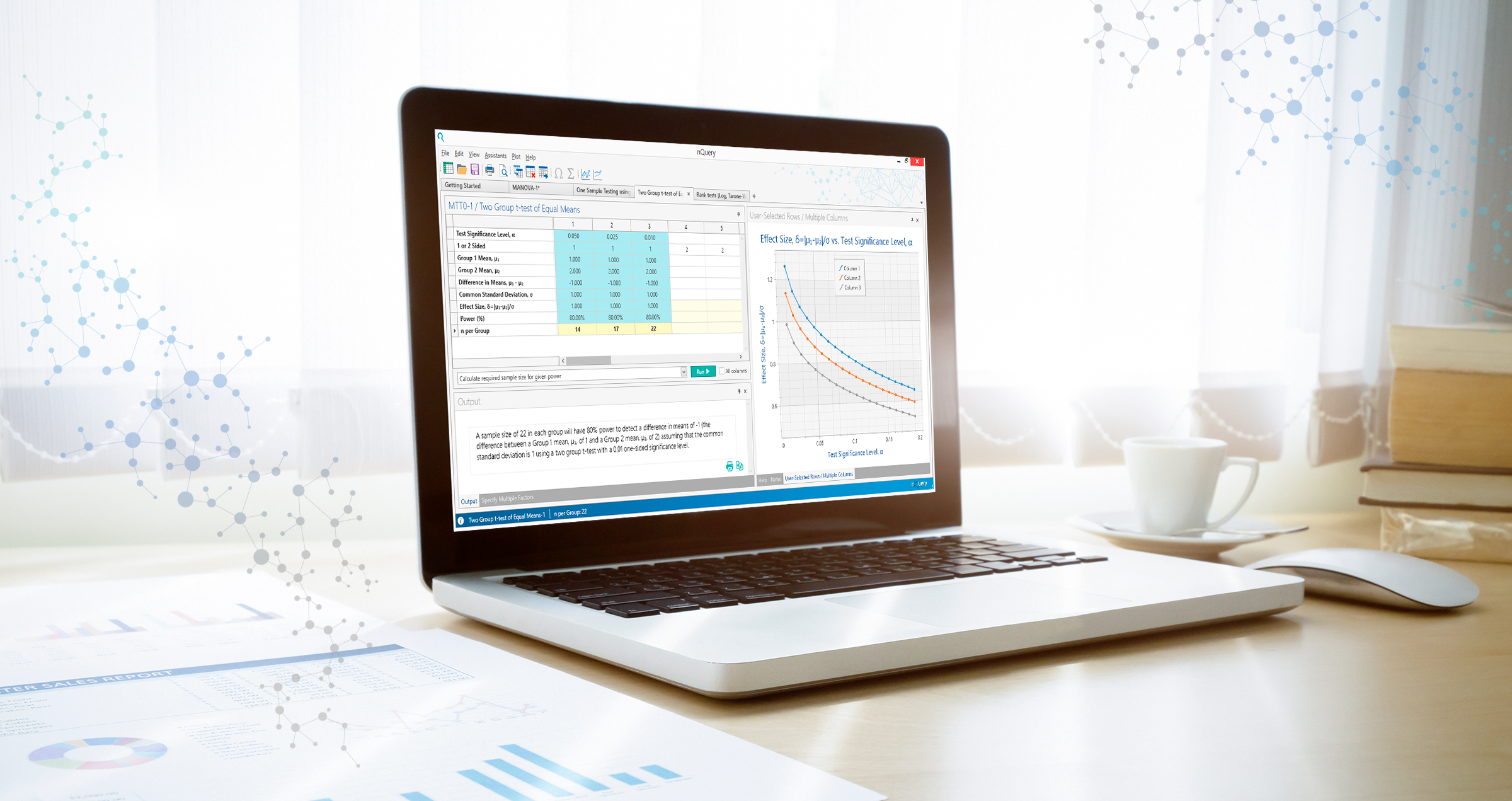 (Included in the Expert Tier)

The Winter 2021 release (v9.1) builds on the latest module for the nQuery platform - nQuery Predict.

These updates focus on UI improvements and further abilities to customize your graphs.

What is nQuery Predict?

nQuery Predict is the latest module for the nQuery platform for clinical trial design.

With nQuery Predict, you gain access to tools that accurately predict key enrollment and event milestones both before and while a trial is ongoing. This gives you the ability to identify roadblocks and take action to keep your trial on schedule. 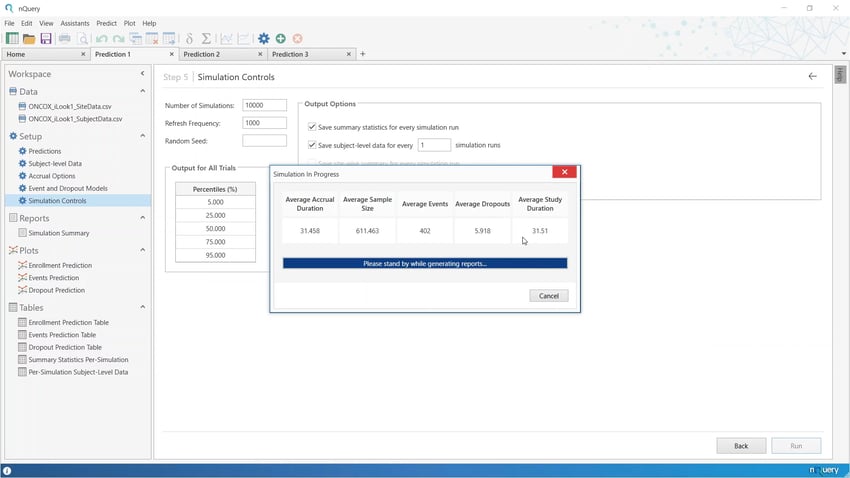 What are the key features of nQuery Predict?

nQuery Predict provides tools that project the expected trajectory of enrollment or event milestones based on current enrollment trends as well as tools to assess the effect of reduced or increased recruitment from that point onwards.

Enrollment prediction (i.e. how long will it take to achieve the desired sample size of patients) is a common issue across all trials and has direct impacts on the administration of a clinical trial.

Delays in patient enrollment or trial events create additional costs. With nQuery Predict, you can ensure the best performance by examining projections at both the planning stage and interim monitoring. 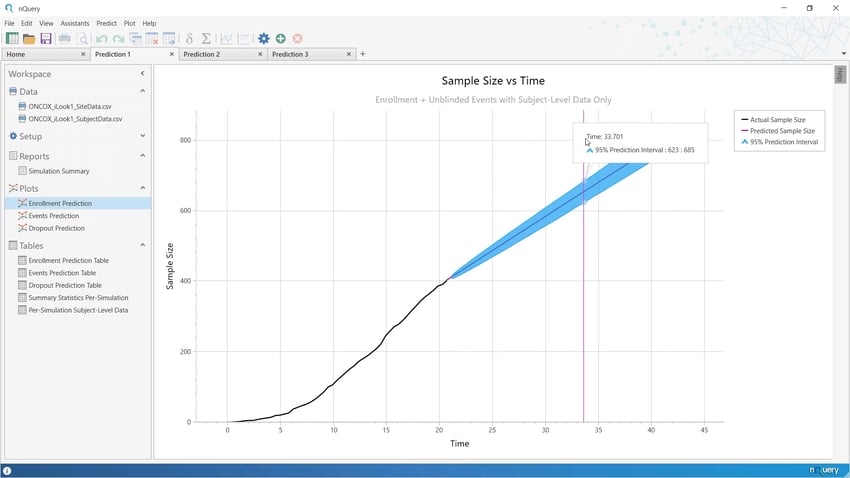 Event prediction is a complex problem in trials, such as those in oncology that plan to use survival analysis.

Key decisions such as when to conduct an interim analysis or when to conduct right-censoring to finish the study are most commonly based on a priori unknown time when a given number of subjects will have had an event rather than based on the fixed follow-up more common in other areas. This means that accurate projections of when event milestones will be achieved are vital to provide realistic estimates of expected timings and costs. 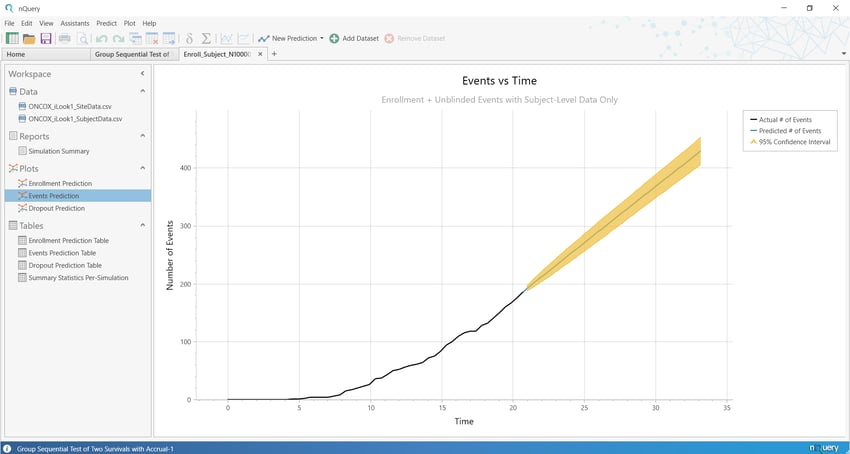 nQuery Predict uses simulation for milestone prediction with a variety of models for enrollment and events prediction.

To access the new predictive module you must have a nQuery Expert Tier subscription.

If you do, then nQuery should automatically prompt you to update. You can manually update nQuery by clicking Help>Check for updates. 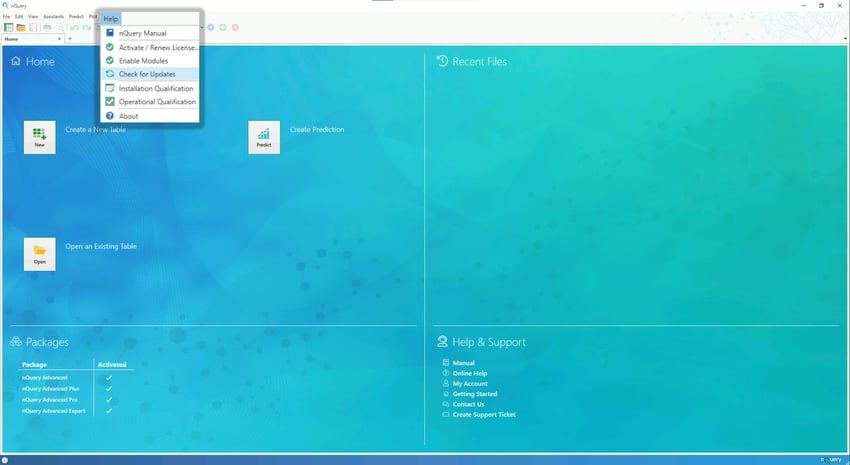 (Included in all packages: Base, Plus & Pro Tiers)

What's new in the BASE tier of nQuery?

In the Winter 2021 update, nQuery v9.1 sees 16 new sample size tables added to the base module.

The key areas targeted for development are as follows:

Proportions are a common type of data where the most common endpoint of interest is a dichotomous variable. Examples in clinical trials include the proportion of patients who experience a tumour regression. There are a wide variety of designs proposed for binary proportions ranging from exact to maximum likelihood to normal approximations.

Under this broad area of proportions, we have added tables across the areas of inequality, equivalence and non-inferiority testing. The general area for these tables are as follows:

Non-Inferiority tests are used to test if a proposed treatment is non-inferior to a pre-existing treatment by a specified amount. This is a common objective in areas such as medical devices and generic drug development. The non-inferiority tables added in this release cover the three general types of proportion endpoints one may be interested in for this area.

One-way designs relate to a design in which there is a single independent variable which is manipulated to observe its influence on a dependent variable. One new table has been added in this area. It facilitates one-way designs for the proportion of successes in two or more groups. The methodology used in this table utilizes a likelihood ratio test that has similar power characteristics to logistic regression.

This table assumes the analysis is done using a likelihood ratio test which extends to the case of having more than two independent groups and tests a null hypothesis of the proportion of subjects in each group experiencing the event of interest being equal. This is analogous to the classical one-way ANOVA design that is used to analyze means.

The table added in this area for the 9.1 release determines the sample size necessary for achieving a confidence interval of a specified width for the difference between correlated proportions. The difference between the two correlated proportions is perhaps the most direct method of comparison between event probabilities. There are five options available within this table for the confidence interval formula. These are the Wald and the Continuity Corrected Wald formulae, Agresti & Min's Wald+2 formula, Bonett & Price's Adjusted Wald formula and Newcombe's Score formula.

Survival or Time-to-Event trials are trials in which the endpoint of interest is the time until a particular event occurs, for example, death or tumour regression. Survival analysis is often encountered in areas such as oncology or cardiology. In contrast to studies with non-survival based endpoints, like continuous or binary endpoints for example, the statistical power of a time-to-event study is determined, not by the number of subjects in the study, but rather by the number of events which are observed and this requires additional flexibility when designing and analyzing such trials.

There are many different types of survival designs and in this release, we have chosen to focus on the following main areas:

The log-rank test is one of the most widely used tests for the comparison of survival curves. However, a number of alternative linear-rank tests are available. The most common reason to use an alternative test is that the performance of the log-rank test depends on the proportional hazards assumption and may suffer significant power loss if the treatment effect (hazard ratio) is not constant. While the standard log-rank test assigns equal importance to each event, weighted log-rank tests apply a prespecified weight function to each event. However, there are many types of non-proportional hazards (delayed treatment effect, diminishing effect, crossing survival curves) so choosing the most appropriate weighted log-rank test can be difficult if the treatment effect profile is unknown at the design stage.

The concept of Relative Time, as opposed to proportional hazards or proportional time assumes that improvement in a time-to-event endpoint is not instantaneous upon delivery of the treatment, rather, it increases gradually over time. Thus contrary to the assumption of proportional hazard of exponentially distributed times, the effect size is not defined through a single constant number such as a hazard ratio or constant ratios of any two quantiles of time. In this release, one new table has been added in the area of relative time.

The issue of stratified effects is very common in survival trials, i.e. where there is a different treatment effect for different groups or strata within the trial. These strata often correspond to a prognostic factor (e.g. age group, the severity of disease, gender).

Interaction tests are used in order to evaluate whether the treatment effect differs between subgroups of patients defined by some baseline characteristics. Understanding differences in treatment effects across patient subgroups will help identify patient groups which respond better or worse to the treatment.

One new table has been added in this area for this release. The table added allows for interaction effects between two strata for two different groups and assumes exponentially distributed survival curves.

Tests for One Exponential Mean

The sampling plans used within these tests can vary depending on certain choices.

In this release, 4 different tables have been added covering various combinations of these choices. The first of these uses a fixed-failure sampling plan with a fixed sample size. This means that the results are calculated for plans that have fixed sample sizes and are failure censored, i.e. the study terminates when the minimum number of failures that allow the null hypothesis to be rejected occur.

Fixed study duration is used as the termination criterion, which means that the study duration is fixed and the necessary sample size which results in sufficient failures occurring can be calculated. And then finally a table has been added where the results are calculated for fixed-time sampling plans that use the number of failures as a test statistic. This refers to plans whereby the specified number of items are followed for a fixed length of time and the number of failures that occur is recorded.

Prediction models are developed to predict health outcomes in individuals and can potentially inform healthcare decisions and patient management. These models are often used in order to predict an individual's risk of having an undiagnosed disease or condition. Typically they are developed using multivariable regression frameworks which provide an equation to estimate an individual's risk based on their values of multiple predictors (e.g. age, smoking, etc.).

All three of these tables calculate the minimum sample size required based on certain criteria relating to the prediction model. The first of these tables compute the minimum sample size required for the development of a new multivariable linear prediction model with continuous endpoints. For continuous endpoints, linear regression models are typically used in order to predict an individual's outcome value conditional on values of multiple predictor variables.

Tests for One Exponential Mean

If you have nQuery installed, nQuery should automatically prompt you to update.

You can manually update nQuery Advanced by clicking Help>Check for updates.

If your nQuery home screen is different, you are using an older version of nQuery.
Please contact your Account Manager.

(Included in the Plus & Pro Tier)

What's new in the PLUS tier of nQuery?

In the Winter 2021 update, nQuery v9.1 see one new sample size table added to the Plus module.

The area targeted for development is as follows:

Highest Posterior Density intervals are credible intervals that give the shortest interval length for any given coverage. One new table has been added in this area for this release. This table calculates the sample size needed for two highest posterior density (HPD) credible intervals for a normal mean to agree to within a prespecified distance. The two intervals arise from the use of two different prior densities, each following a gamma distribution. This method is useful in situations where there are multiple prior opinions about the true proportion and we wish to incorporate an “enthusiastic” and “pessimistic” prior into our calculations.

To access these tables, you must have a nQuery Plus or nQuery Pro Tier subscription.

If you do, nQuery should automatically prompt you to update.

You can manually update nQuery Advanced by clicking Help>Check for updates.